Looking to buy a scope but not sure what the right one is? Different scopes have numbers on the box. The numbers are a measure of a unit of measurement and play a crucial role in scope adjustment.

Generally, there are a few important parts in scope to consider before making a purchase. You need to understand the scope basics, like the body and tube with many glasses. You also have to consider the scope reticle and turrets.

When designing turrets and reticles, there are two types of angular measurements that manufacturers use. These are Mil and MOA.

All these angular measurements are important when choosing a riflescope. Keep reading below as we compare MIL vs MOA, their differences and which one is right for you.

The right unit of measurement is crucial when choosing a riflescope. As indicated earlier, there are two units of measurement to consider. These are:

MIL: (Milliradian) Measurement of an angle within a circle.

MOA: (Minute of Angle) Measurement of an angle within a circle

The difference between these two measuring units comes down to maths. The two units measure angles within a circle. However, the angles are different in size. Mil is usually larger than MOA.

MOA is the more common one and a lot easier to understand than Mils. While the units are not limited to metrics or imperials, MOA is commonly used with yards and inches. However, you can still make a few maths to change it into other conversions.

Mils works the same and users can make conversions to suit either system.

Let’s break down the two measurement units and see how each works.

You already know the meaning of mils. However, there is a big misconception about what mils stands for. Most people think mils stands for the military it’s widely used in military and practical competitions.

One mil is equal to one-thousandth of a radian, or approximately 0.057 degrees. It is often used in the field of marksmanship to measure the adjustment of a scope’s reticle, which is the crosshairs or other aiming point in the scope.

When using a scope, a shooter will often use mils to make adjustments to the scope’s elevation and windage turrets. The turrets are the small knobs on the scope that are used to adjust the point of aim of the reticle.

One complete rotation of a turret typically corresponds to 10 mils of adjustment. So if the shooter needs to adjust their point of aim by 5 mils, they would turn the turret half a rotation.

It’s important to note that the adjustment on the scope’s turrets may be in MOA (Minute of angle) instead of Mils, but the concept remains the same, but the math required for the conversion will be different.

In addition to being used for adjustments, mils can also be used to make range estimates. With some knowledge of the size of the target, a shooter can use the mils indicated by the reticle to estimate the range of the target.

Mils are commonly used in military and long-range shooting and have become more accurate at longer ranges. It’s less common in sport shooting, such as hunting, but it’s becoming more common among precision shooters.

In summary, mils are a unit of measurement used to make adjustments to the point of aim of a scope’s reticle and to estimate the range to a target.

When you adjust the scope’s reticle (the crosshairs or other aiming point) by one MOA, the point of impact of the bullet will move 1.047 inches in the corresponding direction at 100 yards, 2.094 inches at 200 yards, and so on.

Some scopes are designed with adjustment turrets that allow the user to make adjustments in MOA increments, while others may use milliradian (mrad) increments, which are similar but slightly different.

For example, if a scope has an adjustment range of 100 MOA and you’re shooting at a target that is 100 yards away, you would be able to adjust the point of impact of the bullet by up to 104.7 inches (100 x 1.047) in any direction. This can be useful for making elevation and windage adjustments to account for the bullet drop and wind drift at long distances.

Some scopes have the ability to adjust the reticle in a fraction of MOA, such as 1/8 MOA, 1/4 MOA, or 1/2 MOA. The finer the adjustment increments, the more accurately the scope can be adjusted to the shooter’s preference.

When you are purchasing a scope, knowing the MOA and the reticle adjustment capability will help you understand the scope’s capability in terms of accuracy, precision and versatility.

It’s worth noting that MOA is just one of several units of measurement used to indicate the adjustment range of scopes, and not all scopes use MOA. Some scopes use milliradian (mrad) or other units, so it’s important to be familiar with the units used by the scope you’re considering in order to fully understand its capabilities.

What are the differences

In terms of Reticles, MOA reticles usually have thicker lines compared to mil-dot reticles, and this is because MOA is a bigger unit of measurement. MOA reticles can also be simpler to use for holdovers, as the distance between each hash mark is the same size.

Whereas MIL reticles can be more versatile for long-range shooting since the distance between each hash mark increases as the distance to the target increases.

It is important to note that both systems have their own advantages and disadvantages. It depends on the shooter’s preference and what they want to achieve.

Which One is Right for You?

Ultimately, the choice between MOA and MIL comes down to personal preference, and it’s recommended to experiment with both to see which one you prefer.

After all, both are units of measurement with very little difference. The best unit is one that helps you shoot precisely.

Another thing to consider is that most scopes have adjustments in 0.25 MOA or 0.1 MIL, so if you feel comfortable doing math with the metric system, mil might be the better option for you.

In conclusion, both MOA and MIL come with pros and cons. They are both effective reticles that can get the job done. Shooters need to do their math correctly and choose a reticle that best works for them.

Whatever reticle you choose, a shooter needs to ensure the spotting scope, reticle turret and any other measuring equipment feature the same units. You need an angular unit that you can use with ease and comprehend when under stress.

You need to have everything in the same unit to avoid length conversions. Do some research and pick a unit that you’re comfortable using in the field. It will make things easier for you.

Ben Baker is a lifelong hunter and fisherman. His first experience with a gun was, literally, carrying a cork popgun with his grandfather on a dove hunt. The young Mr. Baker was still in diapers at that time. He has hunted across the United States and Canada with everything from .22 shorts to a .50 BMG. His favorite long gun is the Mosin Nagant in 7.62x54r. His preferred handgun is a Colt Government 1911 in .45 ACP. He may be the only person on the planet to have hunted, and killed, a bobwhite quail with the .45 ACP. His favorite shotgun is the Mossberg 500. For nearly 30 years, Ben has professionally reviewed guns and gun accessories. His writing on many topics has appeared in publications and websites across the planet. 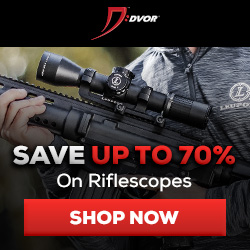